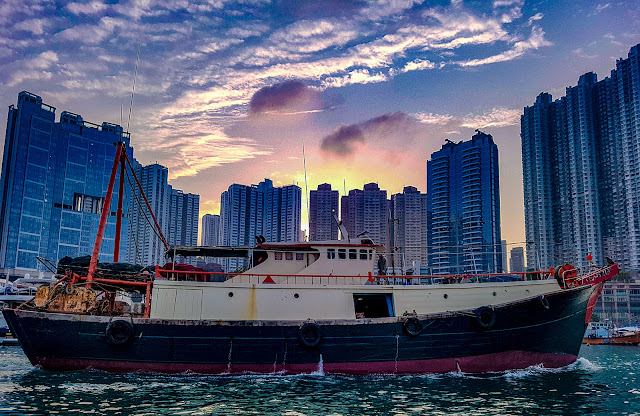 Fishing trawler returning to the Typhoon Shelter at sunset.
Posted by Duff Hughes Photography at 8:49 AM No comments:

Search and Rescue in the Typhoon Shelter 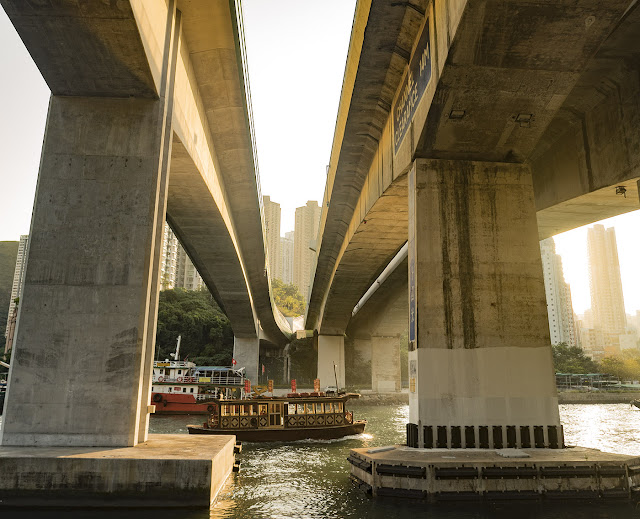 Joanna and I both woke up at about 2:30 am this morning to the sound of helicopters making close
and repeated passes above the Typhoon Shelter.

This is invariably bad news, and cause for concern. It may mean that there is a fire on the hillsides of the peaks surrounding the Shelter, and the fire control helicopters are making water or chemical drops to try to suppress it, or hikers injured and in need of rescue. That there is a building fire at one of the shipyards or high rise condos on shore that may threaten to spread to Watermark and other boats. Or that a boat in the Shelter is on fire, with the possibility of exploding its gas canisters or fuel, or sinking. That there has been a collision of ferries or boats off shore that may sweep survivors or bodies onto the coast, the sea wall, or into the Shelter itself. That someone has fallen off the seawall, or a man overboard of one of the boats, or a suicide. There may have been smugglers trying to make their get-away from the Marine Police. Or even a response to the sounds of automatic gunfire.
All of these events have actually happened during our time in the Typhoon Shelter. All of these possibilities run through our minds as we hear the sounds in the darkest hours of the night and try to count the rotors.

So, after a sleepless night, the story today, reported in a Chinese language newspaper:
A very drunk gentleman decided that he could dive off of the Ap Lei Bridge (which connects Hong Kong Island to the island of Ap Lei Chau, and spans the Aberdeen Channel) and swim to the Jumbo Restaurant floating in the middle of the Typhoon Shelter. He then made his dive. He survived. He made the swim towards Jumbo. He survived. He told his rescuers "Thank you", but that three or four others had jumped off the bridge with him, how were they?

So there were not only the multiple helicopters we heard, but Marine Police Cutters and "go-fast boats", Fireboats, emergency Rescue and Recovery scuba divers, Hong Kong Police on shore, ambulances, and other emergency responders in a search and rescue attempt through the early morning hours to save the lives of his friends who had joined him in diving off of the bridge.
In reports this morning, it turns out that the others in the water were non-existent. Either his friends did not join him in his jump, or he only imagined he had friends who were willing to followed him off the bridge.

A much better ending to this morning's story than it could have been.

Posted by Duff Hughes Photography at 5:22 PM No comments:

Above the Typhoon Shelter 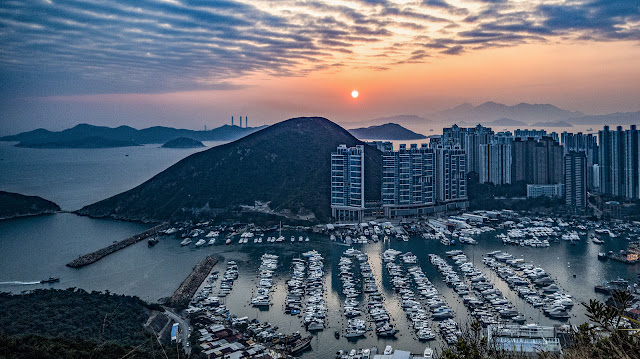 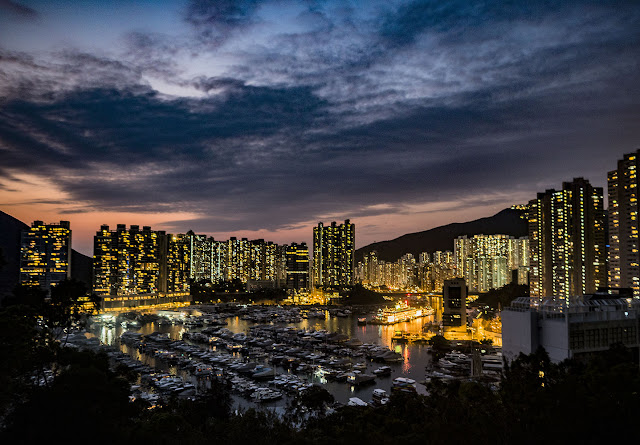 Posted by Duff Hughes Photography at 11:36 AM No comments: 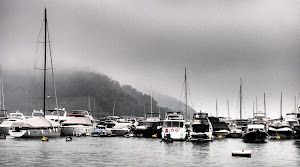